Morrinsville Intermediate have won the 2018 National Primary School Shield, which was held at the NZC High Performance Centre in Lincoln from November 22-24.

Morrinsville Intermediate had an outstanding week, going through the tournament unbeaten on their way to winning The Shield. Special mention must be reserved for Aria Mischewski, who was the third-highest run-scorer (165) of the tournament and the top wicket-taker (11).

The Shield is contested by primary and intermediate school girls, provides participants with the opportunity to play cricket amongst friends and test their skills against schools from within their region and also across the country. 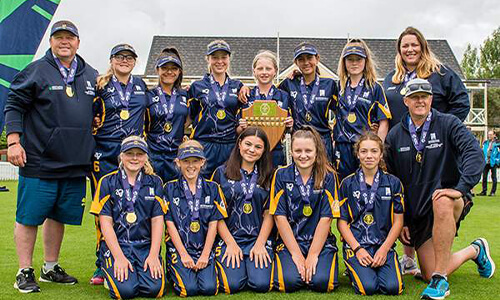 The competition began with teams playing nearby schools from their region in term one of the school year, with winning teams advancing through to their regional finals. Morrinsville Intermediate, along with the other five regional winners from around the country, then attended the national finals in Lincoln, with the format consisting of Twenty20 cricket played in a round-robin format.

The week also provided the girls a taste of the professional environment, with the tournament being held at the NZC High Performance Centre and all matches being live scored at www.nzc.nz and on the BLACKCAPS mobile app.

Full results and match reports are below.

Remura won the toss and decided to have a bowl, it proved to be the right decision as they bowled out Morrinsville for 35 runs. Summer Wright top scored with 7 runs but what cost Remuera was the 23 extras they bowled. Kate Irwin was the outstanding bowler for Remuera taking 6 wickets while only conceding 2 runs. But the run chase wasn't smooth sailing as Remuera lost their first 5 wickets for only 10 runs, Aria Mischewski had the impressive figures of 6 wickets for 3 runs. Wickets continued to tumble and despite Keira Barlow top scoring with 8 runs, Remuera fell 8 runs short handing a first up victory to Morrinsville.

Heaton Normal Intermediate 74 all out off 18.1 overs (S Kane 3-13) lost to Morrinsville Intermediate 75-1 off 10.3 overs (A Mischewski 41*), Lincoln Green
Heaton have suffered their first defeat of the tournament against Morrinsville. Heaton made 74 in their innings after being bowled out within 20 overs. Morrinsville made light work of the target winning by seven wickets. Kate Cowan top scored for Heaton with 19 runs but some brilliant first innings bowling by the Morrinsville attack real suffocated Heaton, Sara Kane (3-13) and Aria Mischewski (2-13). Mischewski also delivered again with the bat scoring an unbeaten 41 runs including six fours to keep Morrinsville unbeaten after the first two rounds.

Raroa Normal Intermediate 126-7 off 20 overs (J Barker 38, D Girish 37*) lost to Morrinsville Intermediate 129-6 off 18.2 overs (A Mischewski 62), Lincoln Green
Morrinsville have come-up victorious in their round 3 clash with Raroa, winning by 2 wickets. Raroa were sent into bat first and made a commanding 126 runs in their 20 overs. Jess Barker (38) and Dhriti Girish (37*) proved to be pivotal for Raroa, giving their bowlers something competitive to defend. Sara Kane (2-31) and Sophia Boros (2-23) were the pick of the Morrinsville bowlers. Aria Mischewski continued her divine form through to her innings against Raroa by making 62 runs including 10 boundaries. The rest of the middle order chipped in with a series of cameos but Mischewski laid a solid platform to guide her team to victory. Mentions also go to Jess Barker (2-20) and Olivia Catherwood (2-1), despite some impressive bowling spells from the Raroa attack they couldn't quite claim victory.

Sacred Heart Girls College 77-6 off 20 overs ( H Johns 21) lost to Morrinsville Intermediate 79-0 off 11.3 overs (A Mischewski 37, S Boros 35*), Lincoln No. 3
Morrinsville have eased through the fourth round of the tournament with a convincing 8 wicket win over Sacred Heart. Sacred Heart were sent into bat first and ended their innings with 77 runs after 20 overs, Sophia Bolton (12) and Heidi Johns (21) were their top scorers. Morrinsville's bowling attack was superb in restricting Sacred Heart's batsmen, Makayla Green, Abby Lamb, Sara Kane and Sophia Boros all picked up a wicket each but it was their economy rate that really did the damage. In reply to Sacred Heart's 77, Morinsvillie's openers single handily won them the game, Aria Michewski keeps showing her class as she belted 37 and her partner Sophia Boros was not out on 35 runs.

Balmacewen Intermediate 36 all out off 7.4 overs (S Kane 5-15) lost to Morrinsville Intermediate 37-0 off 4.4 overs (A Mischewski 25*), Lincoln No. 3
Morrinsville have eased their way to victory after beating Balmacewen by 8 wickets. Morrinsville's bowling attack was too good for Balmacewen, dismissing them for 36 in 7 overs. Sara Kane was the pick of the bowlers taking 5 wickets for 15 runs. In reply, Mria Mischewski continued her strong form with an unbeaten 25 runs to anchor Morrinsville to a convincing fifth round victory. To the delight of Morrinsville that victory takes them through the tournament unbeaten and are crowned the National Primary School Shield champions.