The Spirit Shake up the Magicians

The SKYCITY Hamilton Northern Spirit travelled to Hagley Oval to Take on the Canterbury Magicians.

A refreshed (SKYCITY Hamilton) Northern Spirit side upended the star-studded Magicians at the Cantabrian fortress of Hagley Oval to open their 2017/18 T20 season with a bang.

Restricting the Mags to exactly 100 in their 20 overs, it was game on for the chasing Spirit who ultimately completed their task with 10 balls to spare for a crunch six-wicket win over last season's finalists.

The Mags hadn't got off to their customary strong start, with Satterthwaite coming in early at first drop to anchor the innings with a classy 43 at better than run a ball.

However, stellar Satterthwaite had precious little support as all her experienced teammates came and went for single figures until she herself capitulated in the final over, while former Auckland Heart and now the Spirit's Samoa international Regina Lili'i swept in for a brace of middle order wickets (Erin Bermingham and Thamysn Newton) and a run-out, while young Nensi Patel impressed with the wicket of Lea Tahuhu and a hand in two run-outs as well.

It was a total team effort with the ball and in the field, and stirred the northern batsmen to an aggressive chase, even despite the unsettling early loss of both captain Nat Dodd and WHITE FERN Sam Curtis.

Opener Katie Gurrey held it together with her 25 before Lili'i and Felicity Leydon-Davis combined for an unbroken 52-run stand for the fifth wicket to bring it home. 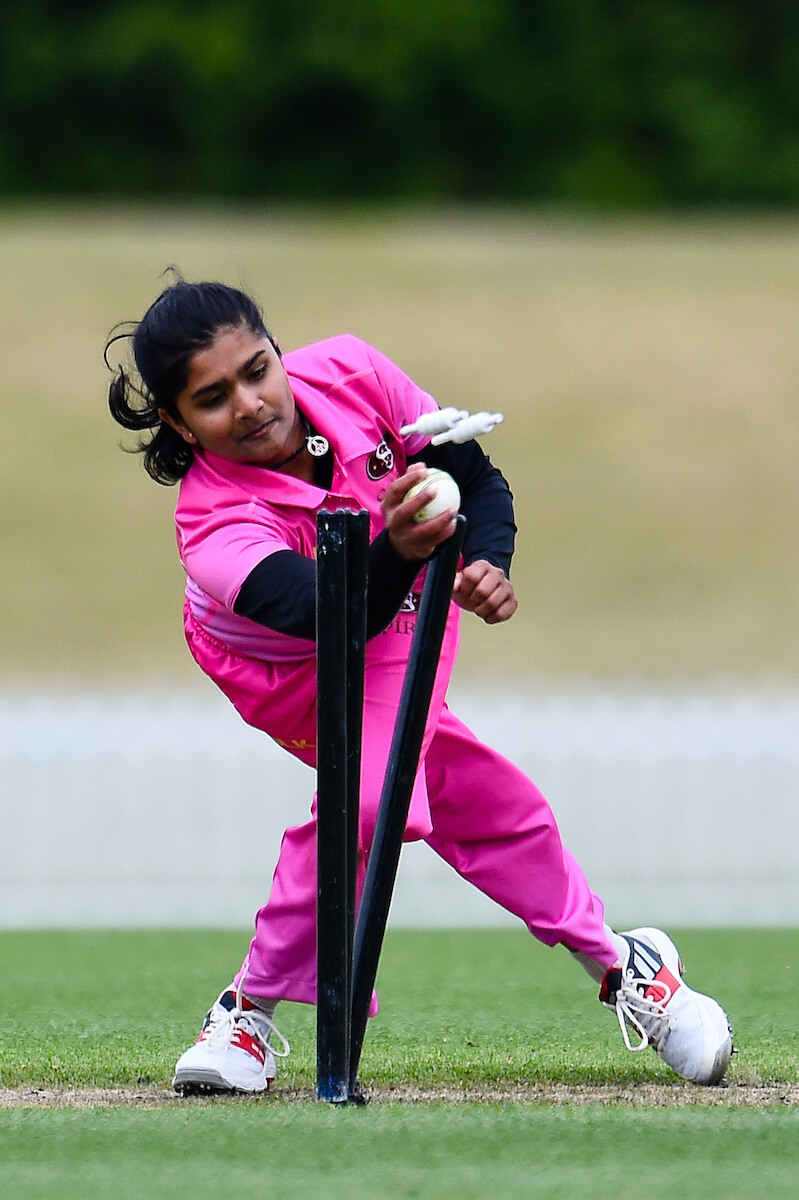 Still stinging from their first-up T20 loss the evening before, the Canterbury Magicians were in for another fright in the Hallyburton Johnstone Shield one-day opener, sneaking home by just a tight seven runs at home in a thriller against Northern Spirit.

Home captain Frances McKay was keen to bat and ensured her side got off to a good start, adding 46 with Amy Satterthwaite for the second wicket and then a 50-stand with Kate Ebrahim after Satterthwaite departed shortly before drinks.

The batting star of last summer's one-day final at the same ground, former WHITE FERN Ebrahim looked sound as houses as she stormed to an unbeaten 82 off 118 balls, taking charge of the innings after McKay was run out on 41 in the 33rd over, the hosts still just three down at that point until Feala Vaelua Pula rocketed the ball to the keeper.

However, the going didn't get any easier in the back 15 overs for Spirit as Erin Bermingham calmly settled in for a quick 44 off just 40 deliveries, punching up an 80-run stand for the fourth wicket en route to a fairly robust tally of 225 for five, Thamsyn Newton caught off the final ball of the innings.

Northern Spirit made a strong start of their own to the chase, again with the captain leading the way.

Natalie Dodd's 74 anchored her side through to the 38th over, and, along with fellow opener Katie Gurrey (23), she sent the ball flying over the rope.

Their 63-run opening stand was backed up by a 43-run stand for the second, even if first drop Sam Curtis struggled to get going. The disciplined bowling pressure led to a double breakthrough from McKay and Bermingham, Spirit dipping from 105 for one to 105 for three in a blink, but with Dodd still there guiding the way.

Fellow former WHITE FERN Felicity Leydon-Davis joined her en route to a promising 39, but when first Dodd and then Leydon-Davis were removed, and Regina Lili'i was stopped in her tracks by Satterthwaite after a handy quick 24, the pressure went on the lower order to get up from 196 for six, 30 runs needed off the final 2.4 overs.

It was a valiant attempt, but Spirit's courage also cost two further wickets as they finished up nine down and just seven short against the defending champions.

Northern Spirit captain Natalie Dodd again led from the front in Sunday's one-day rematch at Hagley Oval, but this time she would receive back-up on the scoreboard from only former South Africa rep Bernadine Bezuidenhout, whose half century was vital to Spirit getting 207 on the tins.

It was a somewhat disappointing tally for the clearly revitalised Spirit after Dodd had won the toss and plastered 62 off 88 balls, once again steadily anchoring the team to, and through, the 30-over mark.

However, the Magicians' attack was going from strength to strength, and was fired up to make it two in a row in the one-day format.

Captain Frankie Mackay led the way herself with a caught and bowled to dispatch Katie Gurrey after just a start of 22, then spun her way to 3-36 off her nine overs, well supported by the rest of her bowlers.

The chase didn't really threaten the Mags this time, even as Spirit came back into the match with a blast of quick middle order wickets after Kate Ebrahim fell in the 34th over, Regina Lili'i grabbing 3-22.

Mackay has already ensured a sound start with what would eventuate into a unbeaten 57, carrying her bat as she patiently anchored the win, while first drop Amy Satterthwaite fell just two shy of her own half ton - by which time the hosts had chipped off more than half the required runs.

The position was such that ultimately the Magicians cruised in to the finish line with almost seven overs to spare.