The Spirit laid down a serious marker in the Hallyburton Johnstone Shield title race as they recorded a second consecutive victory over previously first-placed Central Hinds to remain in second-place; one point behind new leaders Auckland Hearts.

After a 56-run opening partnership was broken by Eimear Richardson, the Central Hinds lost three further quick wickets to be 74/4 after 19 overs, with young seam bowler Emma Baker catching the eye with the wickets of Anlo van Deventer and Kerry Tomlinson.

Everytime the Hinds seemed to start to build some momentum in their innings, the Spirit pulled it back.

Hannah Rowe and Esther Lanser had added 41 for the fifth wicket, before sharp work from Shriya Naidu and Kate Anderson saw Lanser run out to make it 115/1 in the 27th.

Again, the Hinds were building towards a 50 partnership (including the distraction of a rain break), before Rosemary Mair was caught off the bowling of Carolyn Esterhuizen, and when Michaela Greig went two balls later, the Hinds were in deep trouble at 156/7.

The end was swift from this point on, as Esterhuizen affected the fourth run out of the innings when she caught Georgia Atkinson short, before Leydon-Davis had Claudia Green caught for her second wicket of the innings which also brought about the end of the Hinds for 178.

Katie Gurrey and Olivia Lobb were watchful in the beginning of their pursuit, which had been increased to 179 off 46 overs following a further rain delay at the end of the innings break. 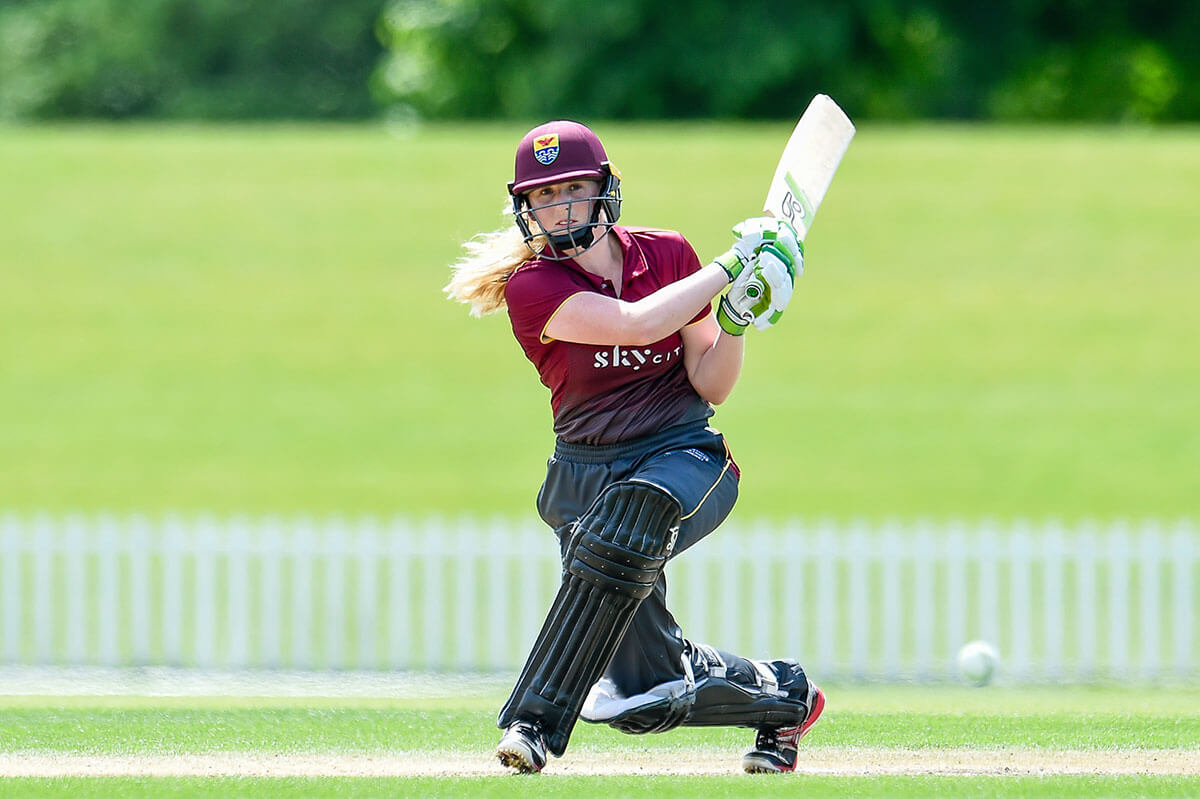 They made their way to a 50-run partnership off 82 balls, which given it was achieved at a similar pace to the Hinds, perhaps demonstrated that the pitch may have been difficult to start on.

Gurrey and Lobb continued to accumulate as they neared yet another century opening stand for the Spirit, but it wasn't to be as Gerogia Atkinson bowled Lobb for 31.

Gurrey then demonstrated the rewards that could be reaped if a batswomen took the time to get to grips with the pitch; upping her scoring rate to reach a half-century off a more-than respectable 62 balls - the fifth time Gurrey has passed the 50 mark in six Hallyburton Johnstone Shield innings this season.

As has been the case for much of the season, Felicity Leydon-Davis came in at three and continued to build the Spirit score with the opener who had remained at the crease, in this instance Gurrey, bringing up a 50 partnership off 60 balls.

The pair added a further 20 runs and looked like they would see the Spirit through, but Leydon-Davis was caught on 29 off the bowling of Rowe with 12 runs required for victory.

Thankfully, Gurrey managed to score two, taking her through to 101 and her second Hallyburton Johnstone Shield century of the summer.

Indeed Anderson did finish the game with one blow in the next over, hitting a four off the second ball to secure an emphatic eight wicket victory with 64 balls to spare.