The Northern Districts region will play host to a feast of international cricket this summer with England, India, Australia, the South African women's side and India A all touring New Zealand in what is one of the biggest home international programmes in history.

The unprecedented wealth of riches will include a full tour from India, a new Test venue in Mt Maunganui's Bay Oval and the novelty of scheduling four of the five T20s against England as family-friendly afternoon games.

"I am very pleased that New Zealand Cricket continues to view Seddon Park and Bay Oval as premier cricket grounds and that the region will host fantastic cricket content this summer," said Northern Districts chief executive Ben MacCormack on the schedule release.

The international summer will start early, with England arriving in late October ahead of playing five T20s and two Tests - the first at Bay Oval, which will become New Zealand's ninth Test venue, and the second at Seddon Park.

"A lot of people have worked hard for this recognition and I'm sure the venue will continue to go from strength to strength."

Ben MacCormack was equally pleased, believing big crowds are sure to follow.

"Bay Oval hosting a Test for the first time will be a great thrill for the people of Bay of Plenty and afar," said MacCormack.

"It's a brilliant facility that I'm sure will be brimming with patrons come November, eager to be a part of history."

The BLACKCAPS return home after playing a three Test series in Australia to prepare for the arrival of India in late January, who will play T20s and ODIs at Seddon Park and Bay Oval among a blockbuster of a tour which includes five T20s, three ODIs and two Tests - New Zealand's first of the World Test Championship, between the World No.1 and No.2 ranked sides.

The BLACKCAPS will also see a lot of Australia over the duration of the summer; travelling across the Tasman for a Test series in December-January, and again for an ODI series in March, before hosting a three-match T20 series at the end of the season.

The WHITE FERNS will prepare for the ICC Women's T20 World Cup in Australia with a visit from South Africa which includes three ODIs and five T20s - the first of which will be the second half of a WHITE FERNS/BLACKCAPS double-header at Bay Oval.

The sides then move to Seddon Park for the second T20, with the venue also hosting the final ODI between the sides.

"Seddon Park has hosted some outstanding international cricket over the past decade and NZC was delighted to see its turf culture performance recognised recently in the international media," said David White when addressing Seddon's busy schedule.

"It's great fans in the region will again get to see such strong content."

Whangarei will also get to experience international action with England due to play two warm-up matches at Cobham Oval.

"The venue is superb and the wider region is so attractive - everyone likes coming to Northland."

MacCormack was also "very pleased the people of Northland will also get to see international teams with the England warm-up matches at Cobham Oval."

NZC's investment in the "A" team programme will continue to build momentum when India A arrive in mid-January to play three 50-over games and two four-day "Tests".

"We're simply delighted with the way it's all fitted together," he said.

"It speaks volumes of the regard in which the BLACKCAPS and WHITE FERNS are held that we can attract such a wealth of talent over the course of one summer."

All the WHITE FERNS and BLACKCAPS fixtures will be broadcast live by NZC partners SKY Sport.

Information around memberships and hospitality packages covering the above matches will be released in due course. 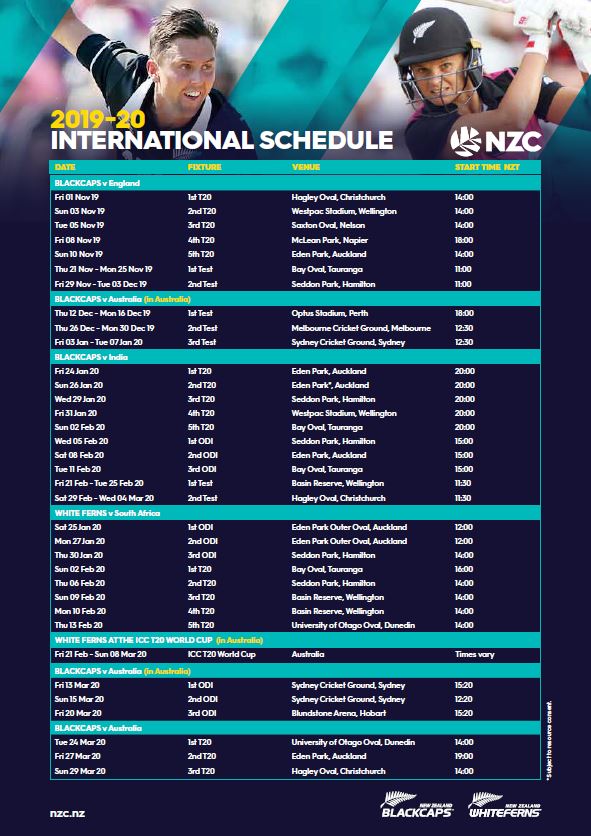