Northern Districts will head to Seddon Park, Bay Oval and Whangarei this season after an action-packed 2019-20 domestic schedule was released today.

The men's and women's Super Smash competitions are also poised for an international injection this summer.

The best men's and women's players in the country will be on show for the entire domestic Twenty20 competition with all WHITE FERNS and BLACKCAPS white ball players available.

"With the BLACKCAPS Test team in Australia and the WHITE FERNS available throughout, the Super Smash gets a special window in which Kiwi cricket fans can watch the best white ball players in the country compete for domestic glory," Super Smash League Manager Wade Johnson said.

This is particularly good news for Northern Districts, who will be able to call on a strong BLACKCAPS contingent to supplement the already quality squad the Knights have assembled, and fans, who will get to see the best players in the country don their regional colours. 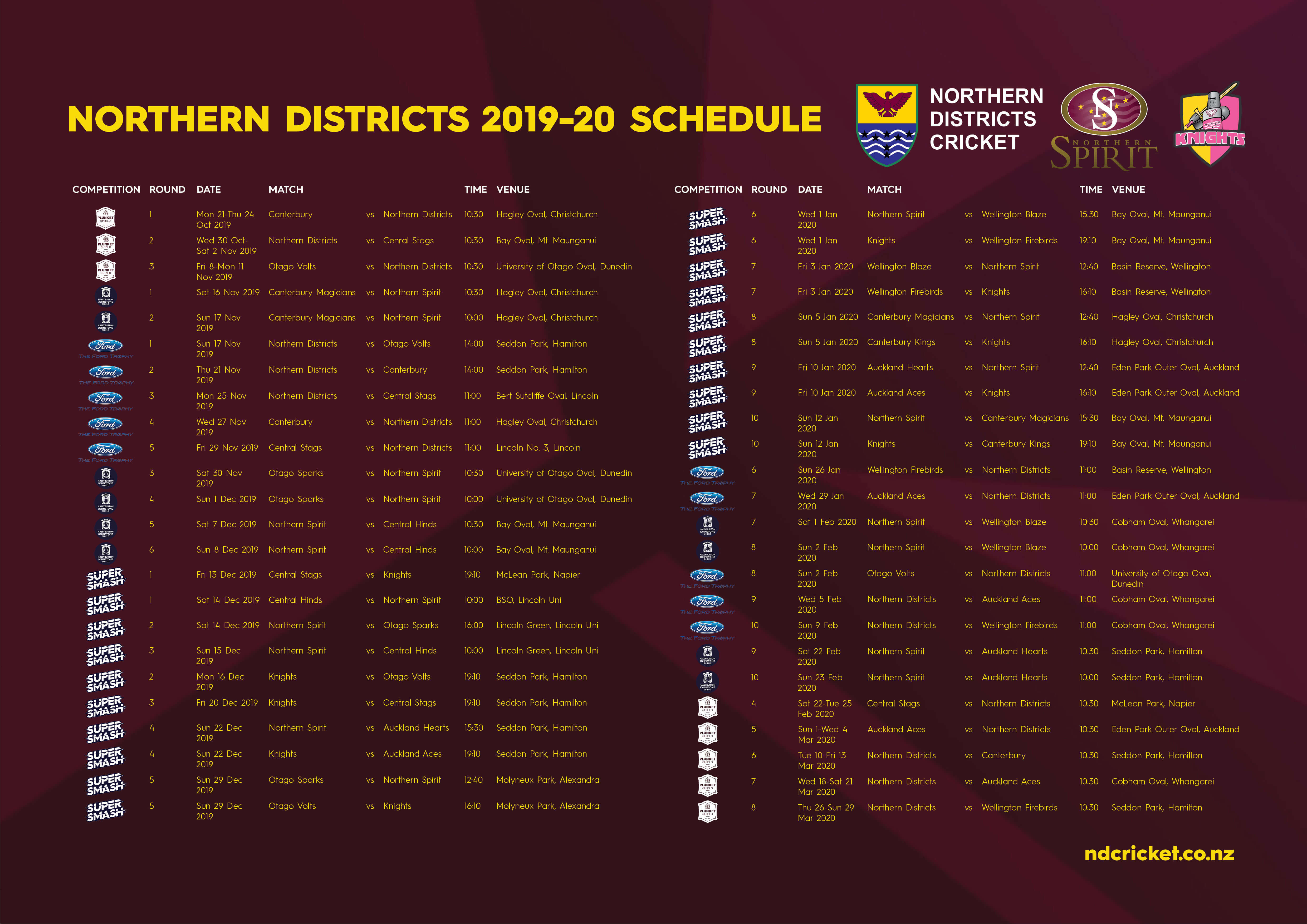 Johnson said the domestic Twenty20 competition is building on the buzz and success of last year.

"Last season's double-headers, both international and domestic were a great success, so we have facilitated an increase from 16 to 21 double-header match days," Johnson said.

"We have also seen increases in broadcast coverage with a 95% increase through our partners at Sky TV. This includes a 170% increase in women's Super Smash coverage.

"This is great for the competition as the public can consume more of the Super Smash on TV than ever before!"

In a rematch of last season's Grand Final, the Knights will head to McLean Park for a date with the Central Stags to start the men's Super Smash competition, while the women start with a centralised round at the NZC High Performance Centre in Lincoln. Both competitions start on Friday 13 December.

The women's Super Smash finals format has also been tweaked with an Elimination Final added to the schedule and the Grand Final to be hosted by the top qualifier in round-robin play.

In the other domestic competitions, both the one-day men's and women's competitions (Ford Trophy and Hallyburton Johnstone Shield) follow a similar structure to last season although Hamilton can look forward to two day/night fixtures in November.

The Plunket Shield First-Class men's competition is again an eight round affair, split with three rounds pre-Christmas before the final five rounds in the new year to close out the 2019-20 domestic cricket season.